Showing posts with the label Corruption
Show all

Monday, March 02, 2020
“Power concedes nothing without a demand. It never has and it never will.” ~ Frederick Douglass  (1857) was an American social reformer, abolitionist , orator , writer, and statesman . After escaping from slavery in Maryland, he became a national leader of the abolitionist movement in Massachusetts and New York, gaining note for his oratory and incisive antislavery writings. In his time, he was described by abolitionists as a living counterexample to slaveholders’ arguments that slaves lacked the intellectual capacity to function as independent American citizens. Northerners at the time found it hard to believe that such a great orator had once been a slave. How might this claim from 1857 offer an important message for 2020? Based on Douglass’s claim, how are we failing our country by not demanding an end to the corruption, starting at the Presidential level?
Post a Comment
Read more

Sunday, November 10, 2019
As per the emoluments clause, should the President of the United States profit from the Presidency, beyond his or her salary and expenses? Why or why not?
Post a Comment
Read more

Saturday, November 02, 2019
On September 25, 2019, the White House released a transcript of a bombshell telephone conversation between President Trump and Ukrainian President Zelensky . What effects might the bombshells contained within this transcript have on Donald Trump’s presidency? Should this post be discovered a few months or even years from now, what effects have these revelations had on the Trump era? Was the outcome predictable? Discuss.
Post a Comment
Read more

Wednesday, October 02, 2019
Whistle blowers are often private sector or government employees who float at the edge of power and enjoy access to the powerful and their secrets. However, whistle blowers themselves hold very little power and can be vulnerable. How can the legal system protect the rights and the lives of people who come forward and reveal wrongdoing?
Post a Comment
Read more 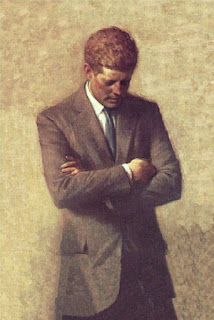 Official Portrait of President John F. Kennedy (Painting by Aaron Shikler .) How might the following statement be true or false? When power leads man toward arrogance, poetry reminds him of his limitations. When power narrows the areas of man's concern, poetry reminds him of the richness and diversity of his existence. When power corrupts, poetry cleanses, for art establishes the basic human truths which must serve as the touchstone of our judgment. -- John F. Kennedy , Address at Amherst College, October 26, 1963
Post a Comment
Read more
More posts
Home