Showing posts with the label Absolute presidential power
Show all

QQOTD: Alan Dershowitz and The Webmaster 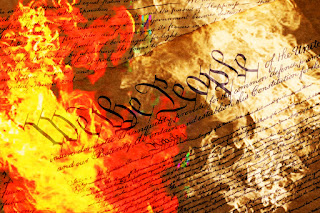 The U.S. Constitution -- Under Fire? ________________________   “If a president does something which he believes will help him get elected in the public interest, that cannot be the kind of quid pro quo that results in impeachment.” ~ Alan Dershowitz , regarding the bribery of a foreign government for the purpose of digging up dirt on a political opponent, occurring the ninth day of the Impeachment Trial of Donald Trump . “Remember January 29, 2020, for this is the day that the Constitution of the United States died.” ~ The Webmaster If Alan Dershowitz’s assertion is upheld in the courts, particularly the Supreme Court, is the Webmaster correct in his/her assessment that the U.S. Constitution has effectively been destroyed? If so, how? If not, why? If Dershowitz’s assertion is upheld, in what fundamental ways would the United States change? What might absolute presidential power mean for personal freedom, the free press, the First Amendment, and fair election
Post a Comment
Read more
More posts
Home